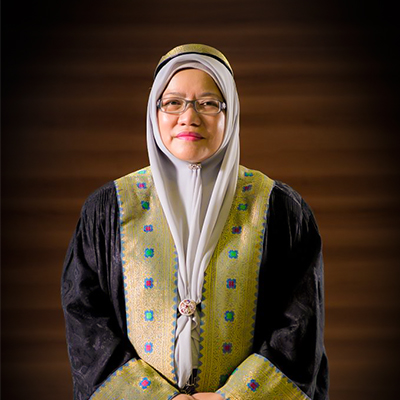 She was accorded the ASAIHL Fellow in 1996, the national nominee for the ASEAN Young Scientist and Technologist Award in 1998 and sat on various committees of ASEAN Committee on Science and Technology (ASEAN-COST in short) including as Chairman of the Advisory Board on ASEAN Plan of Action for Science and Technology (2006-2008), Chair (2011-2014) and national focal point (2002-2014) of the ASEAN-COST Sub-Committee on Biotechnology. In recognition of her contribution to ASEAN-COST, she was awarded the Meritorious Service Medal of ASEAN Science and Technology in July 2008. She is also a founding member of Asian Society of Ichthyologists (2014-). She serves as member of several national committees including Brunei Research Council, Authority for Info-communications Technology Industry (AITI), BDTVEC Council, National Accreditation Council and Knowledge Convention (Majlis Ilmu).

Her research interests are on biodiversity, aquaculture, molecular phylogeny and biogeography of fishes. In 2006, she discovered 3 new Gastromyzon fishes (Gastromyzon aeroides, Gastromyzon cranbrooki and Gastromyzon venustus) in Temburong river with her co-researcher from National University of Singapore. In 2021, she along with her fellow researchers discovered new freshwater species of mussels in Borneo:

She also co-owned two patents involving biodiesel production from local paddy “Laila” with her PhD student. She taught genetics, population genetics and molecular genetics to UBD students (1994-2013). She is appointed as adjunct Professor at UBD and Honorary Professor in College of Science at Swansea University, UK since 1st September 2018.

She is married to Dr Haji Kassim bin Haji Daud and is blessed with a son.